I have been following media reports on the ongoing protests in Thailand, and especially in its capital city Bangkok quite closely. Bangkok is a city I loved the few times I was there – and by that I do not mean the tourist sites or the cliché touristic “services”. Some friends of mine live there, and others have South East Asia as the focus areas of their research. It is safe to say I have my bonds to the “City of Angels”.

So, I followed the news, and also a lot of blogposts, and at some point stumbled over Richard Barrow’s Thailand page which prominently featured (and features) a map of the protests. You know that I am incredibly fond of maps, and have worked on maps and urban protests before, so I was fascinated immediately.

Then, somehow out of a sudden, it became obvious to me how the places of the protests had moved, and at the same time the space(s) of the protests and of the protesters had changed their shapes: first, in late November and early December, the protesters had chosen places which are symbols of the Thai state and government for their demonstrations. Now, with their January 13 “Bangkok Shutdown” campaign, they moved to a relatively small number of large, central crossroads. All of these crossroads are not only important for the city’s motorists (BKK is without exaggeration one of the if not _the_ most congested cities I have visited so far), but also all are important hotspots for tourists visiting the Thai capital. Victory Monument is where backpackers would get off the bus to reach Khao San Road. The crossroad in between National Stadium, MBK and Siam Malls is the number one shopping area for tourists of all kinds, closely followed by the market inside the Chatutak Park near the Phatumwan Intersection. The whole length of Sukhumvit Road anyway is a giant tourist walking mile.

These observations are only blunt speculation, and based on nothing else but on compiling in my head what I read somewhere, somewhen with what I believe to know about places in Bangkok.

Well, then, why not gather more data? Fine: I cannot just leave Salzburg for two weeks and conduct interviews with people whom I probably do not even share common languages with. Fortunately, people use Social Media a lot, and in my working group there is some experience with gathering and analysing short messages people send via Twitter. Fortunately, Twitter is very popular with political protesters, and Hash-Tags for campaigns or movements emerge quickly and remain comparably stable. Fortunately (no. 3), Twitter messages can be georeferenced by their authors, and very often are so by default if sent from mobile devices.

This blog post will not cover any of the political issues, and will not try to understand or explain the arguments of either side of this conflict. There are people out there who really know what they are talking about, and I do not feel like I should put myself into this endless row of not-so-sophisticated commenters. If you read the reports in the various blog posts carefully, I think you can build something of an own opinion on the topic. I try to stick to data here, and analyse it with some respectful distance, without digging into political reasoning.

I quickly wrote a script (OK, quickly is relative, it still took me the better part of today) to gather tweets into a PostgreSQL/PostGIS database according to a filter. The script collects all tweets from the past which are still available (6-9 days back according to Twitter help pages), and proceeds to gather further messages as they are posted. You can find the source code – as always under a GPLv2 license – in my bitbucket at https://bitbucket.org/christophfink/tweet-monitor.

I think I was fast enough to catch all of the current #BangkokShutdown messages (and some ten-ish more keywords). My script makes sure I do not miss any of the future tweets.

While I want to wait for more complete data to come in before doing any in-depth analyses, I can already wet your appetite for more: 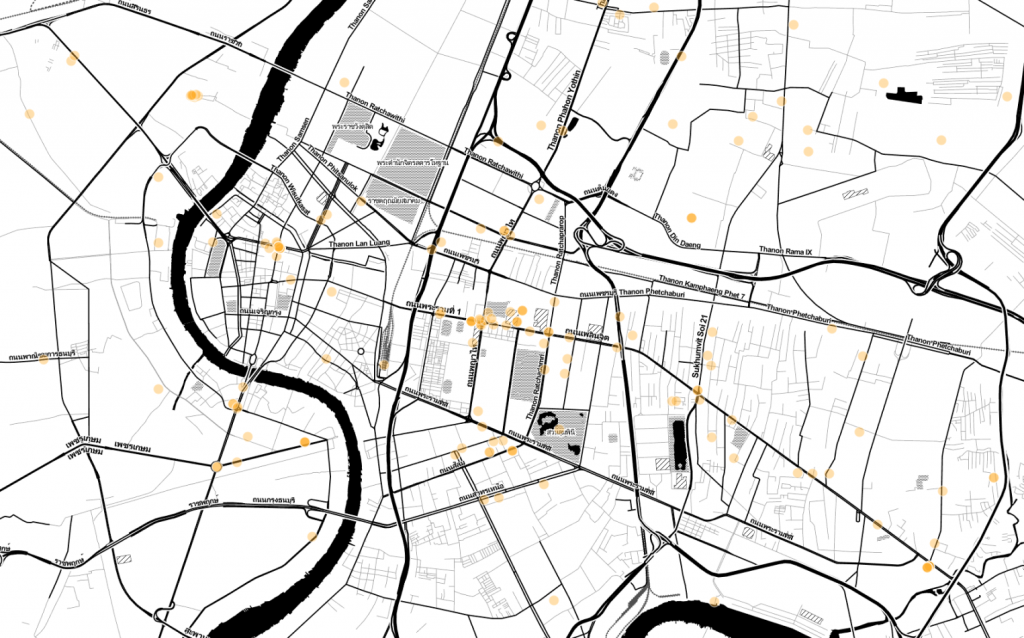