The doctorate college has its annual symposium going on this weekend (20-21 Sept 2013).

I will, among other things, contribute a poster about the recently completed first work package of my thesis. It covers disaggregating census data (a looooot of columns with a loooot of data) onto individual building polygons (no population data at all :/) with the help of a fine mesh population grid (only population count, but comparably high resolution). Final product is a set of interrelational tables of individuals, households, and buildings.

Find the poster as a PDF here 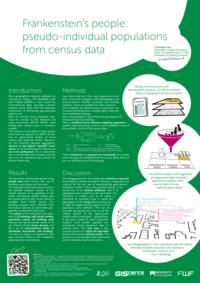 The source code is stored in a git-repository at bitbucket: bitbucket.org/christophfink/one-by-one/, you will need Python 2.x, SpatiaLite, Shapely, and GDAL/OGR. All of them are also available via easy_install/pip/etc. Data and/or explanation of the – I’m being honest with you – at some lengths poorly commented source code upon request 🙂