In late April/early May 2013, Lisa, Stefan, and I taught a workshop at the EGEA Euromed Regional Congress 2013 in El Bosque near Sevilla. We had proposed to work on how social movements employ maps, with three examples: first, the Barrio Maravillas/triBall in Madrid; second, the Gezı Park in Istanbul (that was hindsight, its situation escalated way after our workshop application!); and the planned high-voltage line through nature reserves in the Austrian region of Salzburg.

Our idea was to start off with a mapping exercise to stimulate the consciousness of how subjectively and discoursively maps are produced; then have a bit of introduction to qualitative research methods, with a focus on discourse analysis and urban theories (like e.g. Henri Lefebvre’s ideas); and finally dive into analysing the actual discourses of our examples, taken merely from blogposts and media articles. We planned to conduct some interviews beforehand in Madrid (which didn’t really succeed, because I was too shy of my Spanish proficiencies and didn’t want to approach possible “experts” in the various “centros sociales” across town until the very last day. I didn’t meet anybody who was involved in the 2008 protests.

“Well, not exactly optimal, but hey: we have plenty of online ressources.”, I thought. Hm … we didn’t have internet access in the workshop rooms :/

We completed the mapping exercise, gave the theoretical introductions, and had great joy with the fun part of the workshop: building a DIY surveying kite (and attempting to fly it).

When it came to really examining texts, we were extremely lucky: Someone who tied in with the congress somehow (don’t want to give their name away straight ahead) was involved with the protests againt the Torre Cajasol in Sevilla, and agreed to be interviewed by us. Great fun, and great chance for insights.

Last week, the workshop report was due, and we managed to write what I think is a decent piece of scientific literature. It will be published soon in the congress’ proceedings – but I guess it’s ok, if I give you a sneak preview of the manuscript we sent here. There’s still a review and language editing process going on, so this is definitely not the final version – so keep tuned for any updates 🙂 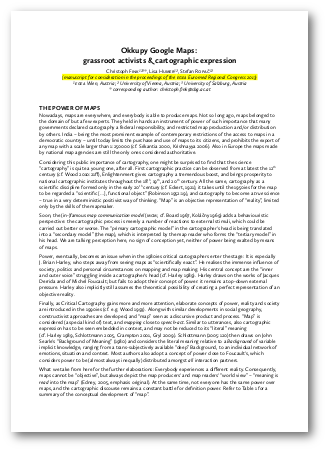